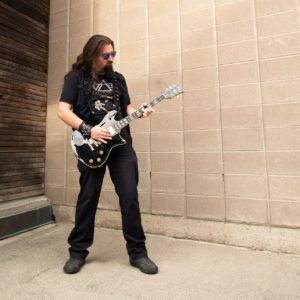 Justin Strode is the founder of both Okzygen Studios and Okzygen Records, and has been a member of a number of different bands and musical projects over the years, including Xaephan, Hirudinoid, Nopheros, Oglob, and more. As a solo musician, his music is all about the guitar as an extension of ones body. He uses the instruments to paint a picture for the listener to apply their own narrative to. With a unique twist of industrial, metal and funk influences, and a blend of instruments from bright brass sections to ethereal synths, the music can shift and change form effortlessly and with a great feeling of excitement.

His latest album Victims of Infinity, was recently released as part of the 2020 Record Production Month project, where an artist is tasked with recording an album in the month of February. You can download the album on his Bandcamp page now (including the player below),  and stream it on all major players, such as Spotify and Apple Music on March 27th!